Here in the lively capital of Argentina and one of the largest cities in South America, you’ll find fabulous cuisine and rich culture. And of course, there’s the tango – the sultry, sophisticated “dance of love.” Take in a tango show to appreciate this art form up close. Or visit colorful El Caminito, a famous street and open-air museum that was named after a 1926 tango song. Then stop into a parilla, a traditional steakhouse where you can get a sizzling sirloin and a full-bodied malbec that was cultivated and bottled in the nearby countryside.

Get your bearings from Sugarloaf Mountain in a setting so stunning it seems as if a fairytale has come to life. Let Rio show you her effervescent bounty at Ipanema and Copacabana beaches, her unshakeable faith at the iconic Christ the Redeemer statue atop Corcovado Mountain, and her spicy personality in a Brazilian churrascaria. Whether you lounge on a beach, amble through historic neighborhoods or admire vistas from one of the peaks that rise thousands of feet over the metropolis, at day’s end you will be convinced that Rio ranks among the world’s great cities.

Although rimmed by the inhospitable Namib Desert, Walvis Bay boasts a natural lagoon that attracts thousands of birds, including flamingos, pelicans and migratory species. Just outside of town, Dune 7 is the highest sand dune in the coastal dune belt and offers an impressive view of the desert. The region also reflects the influence of German settlers who came here over a century ago, as evidenced in the colonial buildings, Lutheran church and charming museum in the nearby town of Swakopmund. 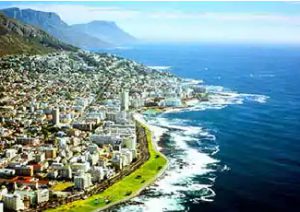 Arriving in Cape Town, your options for an extraordinary day are as diverse as the cultures that have left their mark on this city. Get your heart pounding on a cage dive with great white sharks or stay ashore and relax as you enjoy high tea at the posh Mount Nelson Hotel. You’ll find the views from Signal Hill are even more stunning in the setting sun, and the flavors of Stellenbosch wines are enhanced by artisanal chocolates. Wherever you choose to explore, Table Mountain looms majestically in the background, whether you’re discovering the legacy of apartheid on Robben Island or admiring the colorful houses in the Bo-Kaap neighborhood.

On any given day on Mahé, the combined residents and tourists number only in the thousands, which means you won’t have to stray too far to get off the beaten path. Even when standing squarely on the beaten path at the island’s most popular resort beach, there is plenty of room to relax on the sugary white sands and snorkel in impossibly blue waters. You won’t find many – or any – lines in the museums, gardens and markets of Victoria, so explore at will. Then venture along roads lined with palms and flowering trees to find your favorite spot within the island’s renowned beaches, lush tropical forests and picturesque tea and spice plantations.

As Dubai has carved its place in the vast desert as a glittering tribute to all that money can buy, you may find it hard to believe that the city’s skyline had only a few modest high-rises as recently as the 1990s. After learning about the monumental journey from fishing village to international symbol of opulence at the Dubai Museum, discover for yourself what all the fuss is about in this city of superlatives. Ride the world’s longest elevator to the top of the world’s tallest building, shop in the world’s largest mall, ski the world’s first indoor black diamond run or lounge on a white sand beach on the world’s largest artificial island.

Embrace the contradictions of exhilarating Mumbai, where modernity and tradition weave patterns as complex and alluring as those found on a sari. Unravel the fascinating relationship among the Hindu deities at the 7th-century Elephanta Caves, a UNESCO World Heritage site, delight in the Victorian grandeur of the Chhatrapati Shivaji Terminus, also a UNESCO site, pause for contemplation at the Gandhi Memorial and marvel at the ornate Gateway of India, a symbol of effervescent Mumbai.

When you delve into Colombo, you’ll discover all kinds of fascinating places to enjoy. The commercial hub is the Fort area, named for the old fortress that once stood there. Here you can explore the Dutch Hospital, the oldest building in this part of town, which has been converted into a bustling food and shopping center. For a more tranquil day, stroll the broad expanse of seaside park space known as Galle Face Green, head south to the golden sands of Mount Lavinia Beach, or visit the city’s Buddhist temples.

Formerly known as Rangoon, Yangon is the largest city in Myanmar and yet retains an old-school feel that is rare for a city of millions. You’ll find more quaint colonial buildings than slick skyscrapers, and its most famous structure – the heavenly Shwedagon Pagoda – is about 2,600 years old. Beyond that golden icon, the gilded Sule and Botataung pagodas are also worth visiting. To get an authentic feel for the entire city, the Yangon Circular Railway makes a three-hour loop around town and gives you the chance to rub elbows – literally – with the locals. When you need to refuel, try a bowl of mohinga, a delicious fish soup with rice noodles.

Discover the delightful diversity of Singapore, from charming Chinatown to colorful Little India to Arab Street and the massive Sultan Mosque. Learn about the many Asian cultures that have influenced Singapore at The Asian Civilisations Museum, which houses one of the most comprehensive pan-Asian collections in the region. Gaze at 20,000 beautiful blooms in the National Orchid Garden and observe nocturnal creatures in their natural habitat on the unique night safari. For a historical perspective, visit the Kranji War Memorial and the Changi Chapel and Museum, dedicated to those who lost their lives during World War II.

Bangkok has fabulous streets in which to get lost – and to eat. As you explore, notice what is missing as well as what’s there, for you’ll find a distinct absence of ancient relics and European colonial influence. At the Grand Palace you may detect an occasional Western flourish, but this royal compound undeniably salutes the craftsmanship and creativity of Thailand. Staring at the 15-foot foot of a massive gold Buddha in the young city’s oldest temple, you’ll note that it dates only to the 18th century. To explore ancient history, visit Bangkok’s excellent museums or travel north to the ruins of Ayutthaya, the historic capital of Siam.

A lot has changed since the iconic evacuation photos were taken during the fall of Saigon in 1975 – including its name, Ho Chi Minh City. Nowhere is the evolution more obvious than when you view the city from the 81st-floor observation deck of Vietnam’s tallest building. Still, Ho Chi Minh City retains its unique culture and wears its battle scars with honor. You’ll experience this in the elaborate French colonial architecture and grand arches of the 19th-century post office as well as the Cu Chi Tunnels built during the war. Explore Vietnam’s history in the fascinating museums and pagodas, and watch modern life unfold in bustling markets.

In Chan May you’re ideally situated between centuries of history dating to the Nguyen dynasty in Hue and the modern tumult of the 20th century in Da Nang. The vast Complex of Hue Monuments follows the natural beauty of the Perfume River from a walled imperial city to ornate temples and tombs. This UNESCO site offers a look a Vietnam before the 20th century, but you’ll also see evidence of the Vietnam War in the bombed remains of the Forbidden Purple City.

Only in Hong Kong can you wander through a magical flower tunnel hidden in a housing complex, ride the world’s longest escalator, stand at the base of the world’s tallest seated bronze Buddha and visit a model of Noah’s Ark. In fact, you’ll find yourself uttering “only in Hong Kong” a lot, whether scaling a steep hillside on a funicular tramway to Victoria Peak, dining on dim sum at one of the world’s cheapest Michelin-starred restaurants or perusing goldfish at the Tung Choi Street Goldfish Market.

One of China’s best-kept secrets, Xiamen is a quaint holiday destination famed for its broad beaches and treasure trove of temples. Find serenity at the Tang Dynasty’s South Putuo Temple, with its manicured grounds and ornate structures dating back 1,000 years, then make your way to the lively pedestrian-only island of Kulangsu. This UNESCO World Heritage site displays a unique mix of global architectural styles and is humming with handicraft vendors and captivating cafés.

Standing on The Bund gazing across the Huangpu River to a forest of skyscrapers, it will be hard to believe that a few decades ago there was barely a building over 10 stories here. While the global economy has transformed Shanghai’s skyline, you can still find history and culture during a quiet moment in the 16th-century Yuyuan Garden. For the hip and modern, head to M50, a collection of factories and cotton mills that have been turned into galleries, and view works of established and emerging Chinese artists.

Travel from Tianjin through the North China countryside to see a scenic section of the iconic Great Wall at Huangyaguan. Or hop on a bullet train to Beijing and visit the amazing gates and palaces of the Forbidden City, home to emperors and off limits to foreigners for hundreds of years. A stroll through infamous Tiananmen Square takes you to landmarks such as the Great Hall of the People, the National Museum of China, the Monument to the People’s Heroes and Chairman Mao Memorial Hall.

Packed with 17 UNESCO World Heritage sites, Japan’s delightful imperial capital of Kyoto is less than 50 miles from the port of Kobe, which is also close to other wonderful sights. The more ancient imperial capital of Nara has its own share of UNESCO sites nearby, while the gilded tigers adorning Osaka Castle can be found even closer to the port. Kobe itself also has plenty to offer, from parks and museums to chic restaurants serving the city’s succulent namesake beef.

Tokyo perfectly combines reverence for tradition with cutting-edge technology and culture, so you’ll want to visit the ancient shrines and formal gardens as well as the modern Tokyo Tower that soars above it all. You can expect to encounter a lot of people in a city of around 14 million, but you can also find quiet spots in which to relax, such as lovely Ueno Park. Visit the temple, eat the sushi, sing the karaoke, buy the kimono and embrace this fascinating city.

Draped like a magic carpet across fog-tinged hills, the City by the Bay beckons from Sausalito’s quirky art galleries to Fisherman Wharf’s gloriously fresh seafood. Experience the notorious legacy of Alcatraz, take in the panoramic view from Coit Tower, ride the city’s fabled cable cars, nibble a decadent chocolate treat in Ghiradelli Square, or just watch the moonlight shimmer off the graceful profile of the Golden Gate Bridge.

New York is a town like no other – a city of high energy and controlled chaos with a tough exterior and a huge heart, where a million things may be happening around you, but they all get tuned out when you find yourself standing on a street corner eating the best slice of pizza you’ve ever had. The largest metropolitan area in the U.S., it’s also a place of superlatives, attracting the best in fields from the creative arts to science to business. The list of attractions is nearly endless, and none will disappoint: Broadway shows, the American Museum of Natural History, Greenwich Village, the Brooklyn Bridge, Chelsea Market and so much more.